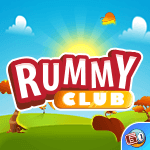 RummyClub is a well-known tabletop game in which players have to place all their tiles on the table. Players can move tiles by assembling various sequences and sets, arranged by number or by color. Each sequence or set must consist of at least three tiles. Examples will be shown in the tutorial, but include three tiles featuring the same number in different colors, or three tiles featuring a sequence of consecutive numbers all in the same color. The Joker can be used to replace any given tile.

Each player receives 14 tiles, the rest of the tiles are the pool. The player’s first move must add up to at least 30 points. After that, the player can play any tile they like, create new sets, or add to existing ones, provided this results in a valid combination. If a players cannot play a turn or wishes to skip a turn, they can press the “pass” button to receive and extra tile instead.